Google announced yesterday on their Online Security Blog that they’ll be retiring the yellow caution triangle badge that appeared when Chrome detected a “HTTPS with Minor Errors” state. This appeared when a website had a mixed-content warning and will now show the same gray “page” icon that appears on a HTTP page.

Here’s a view of the change: 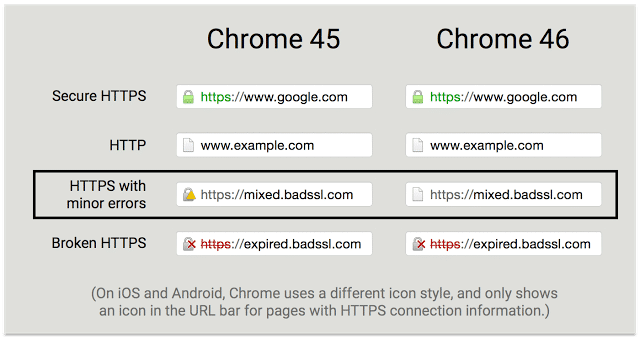 Google says their doing this to simplify things for Chrome users and offer a ‘better visual indication of the security state of the page relative to HTTP.” I suspect this is to help push developers to switch to HTTPS sooner by not showing a warning and potentially freaking out less tech savvy users. The yellow badge was never really that useful as most mixed-content issues reveal a site that “Isn’t fully secure, but it will usually not be less secure than before.”

This update was pushed as Chrome 46 yesterday so you may already see this change. If not visit Chrome’s preference page and it should update itself.

Bryan is co-founder of Cinch, where he is on a mission to keep every WordPress and WooCommerce powered site running smoothly. He lives in Park City, Utah with his family and loves the mountain lifestyle. Connect with him on Twitter @spigot

This site uses Akismet to reduce spam. Learn how your comment data is processed.